You Should Almost Always Vote Yes to Surrender

League of Legends offers players the ability to forfeit games. After a certain amount of time, any player can start a surrender vote, and if enough players vote Yes then the game ends with a loss. When is it appropriate to surrender a game? 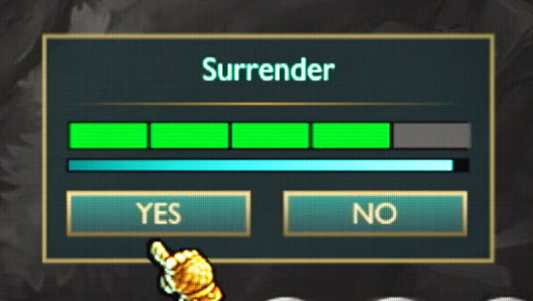 There are to main schools of thought when it comes to surrendering. The first is what I will call the win condition approach. Every game has a win condition. It might be that you need to get Dragon Soul, or destroy two inhibitors, or shut down the fed enemy jungler. The idea is that once you achieve the win condition, victory is within your grasp. Sometimes, if you are far enough behind, you have no win condition at all. If that’s the case, then you should surrender.

The other approach is what I call the never give up mentality. The players who argue this say that, espeically in low Elo games, any game is winnable. Winning depends less on identifying a win condition as it does taking advantage of the opponents’ mistakes, and in low Elo games, your opponent is always making mistakes.

When it comes to surrender votes, I’m here to argue for a third approach, one with a little more nuance than the black and white approaches above. I think that surrendering should be viewed as a communion skill.

If you’re unfamiliar with communion skills, you should check out the related posts with the communion tag

When viewed from the perspective of a communion skill, surrendering takes on new meaning. Let’s break it down into two situations. First we will examine when you should initiate a surrender vote, yourself. Then, let’s see how you should respond when the vote is called by one of your teammates.

When should you call for surrender? It’s instructive to examine when most people surrender. Usually it’s immediately after they die, themselves. Try to imagine the opposite case, a dispassionate surrender. It’s a lull in the game state. The teams are separated from each other; no skirmishing is active. Then, one person does a quick analysis. Based on the gold difference, lane status, and level differences, he determines there’s no viable path to victory. So he calls for surrender.

Have you ever seen that happen? I haven’t. Calling for surrender is an emotional response, and as such, it belongs in the communion skill group.

Viewed this way, surrendering is similar to /mute all. When I wrote about muting I compared it to locking your camera. It’s a way for you to conserve your emotional resources, when you don’t yet have the proper communion skills to manage team chat. This is the same thing. When you surrender, you’re conserving your emotional resources so that you may better apply them in the next game.

Surrendering isn’t a sign of mental collapse, or trolling, or a mistake. In many cases, it’s the optimal move. And this is regardless of the game state. The game state is irrelevant. You could be one hit away from killing the enemy nexus, but if blowing up the enemy nexus will also destroy your emotional well-being, perhaps a surrender is the way to go.

Those skills are, of course, communion skills. A skilled player knows when to admit their own mistakes. They know how to laugh at themselves and not take everything so seriously. Another useful skill is the ability to follow your team’s calls, to not be the shot caller, so that agency blunders can be shared across the team. Finally, there’s the skills-based mentality. Can you view every game as an opportunity to improve? If you can do that, then every mistake you make is an opportunity.

That’s my answer to “When should I surrender?” In short, don’t surrender based on the game state. Also, don’t adopt a “never surrender” mentality. Use surrendering as a tool. Evaluate your own mental state, and try each game to surrender a little later than you would have before. When you do surrender, use that opportunity to take a break, and recharge your mental and emotional state. Perhaps you can use Reiterate to help you focus on the communion skills you can build so you won’t feel the need to surrender so soon next time.

What should you do when a surrender is started by your teammate? Again, we will evaluate this within the context of communion skills.

Your team has started a surrender vote. Should you vote Yes or No? Assume the teammates voting Yes are exercising their communion skills. That is, they’re telling you they are exhausted, emotionally. They can’t play the game properly any more. When viewed with this perspective, a surrender vote is kind of the communion equivalent to an “assistance needed” ping. Except, instead of asking for a gank, they’re asking for emotional support.

Can you do that? This communion skill, raising morale, is very challenging. You need to be able to talk your teammate off the cliff, get them to focus again, and get them back in the game. This is a challenger-level communion skill, equivalent to predicting a flash executing a frame-perfect smite. Most people can’t do that. You probably can’t do that.

Which is not to say that it’s impossible. I’ve seen someone use their communion skills to talk a teammate back into the game, and it’s impressive. But this is out of reach for most people, and if you’re working on levelling up your communion skills your time is probably better spent improving easier communion skills.

If you can’t come to your teammate’s aid, what’s left for you to do? You have to now ask yourself, do you care about having an inting teammate? Because this person is only going to drag you down, game-wise and emotionally. If you have the ability to focus on improving, without caring about whether a game is a win, then you can continue to play, keeping in mind that you are now playing for experience and not for a win.

This is contrary to most surrender advice, but again, we’re looking at it not from a “Can I carry this game?” perspective, but solely from a perspective of “Do I have the communion skills to continue to play the game?” I believe that, in the long run, evaluating your surrenders like this will help you achieve a modicum of emotional stability. And, as your communion skills improve, you may find yourself surrendering less often.

Do you agree or disagree? What do you think about communion skills in general? Let me know in the comments below.