I recently finished Million Perfect Letters by 4am. Here is my review of the game. 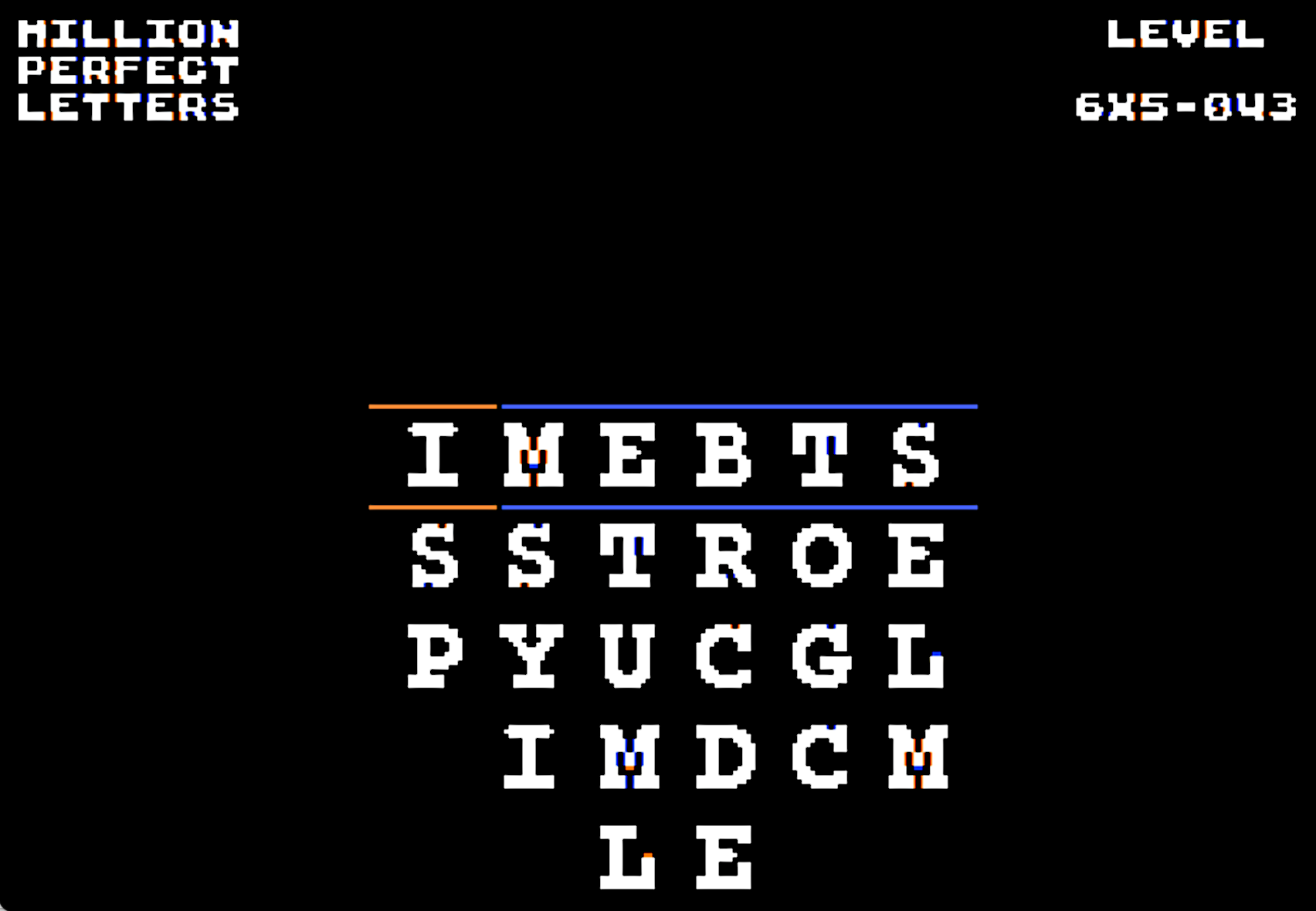 I’ve never done a game review (of a computer game, at least). And this is kind of an odd game to start reviewing with. It’s only for the Apple II, a computer that has been out of production for 29 years. If you want to play, you’ll either need a computer so old it should be in a museum, or you’ll have to run an emulator. I use Virtual II which seems to be the best Apple II emulator for Mac.

Why play a game written for a platform that’s 30 years old? Why not? What matters about a game is not whether its graphics are the most photorealistic or if its storylines have been workshopped by a room full of Hollywood screenwriters, but whether or not it’s worth your time. And I feel this game definitely is worthwhile. I completed the entire game and I enjoyed it to the end.

The premise is simple. You’re given a grid of letters and you have to shift each column up and down to line up letters that make a word. Use every letter and you clear the level. There’s 12 stages, ranging from “Easy” (with a grid of 3 4-letter words) to “Complex” (5 7-letter words).

When I first started playing I thought, “This should absolutely be an app!” But if I had checked the credits more closely I would have found that the game is actually inspired by an app called Typeshift. I downloaded it and it has a typical app monetization scheme where you get the first few levels for free and then you have to pay for more. I might go back to it but at the time I felt I’d rather play the 1,200 free levels that MPL gives me.

The game gets a lot right. First of all, it’s a perfectly-sized casual game. If you want to play one level, you can. Each of the twelve stages has one hundred puzzles, and the game gives you a little break between every ten. It’s enough of an incentive that I would try to play until I hit the next 10% mark. It feels like you’re accomplishing something.

Individually, the best puzzles bridge the gap between “This is impossible” and “Oh, I see it now”. It’s a great feeling to stare at a grid of letters for five full minutes, thinking there can’t possibly be a word hidden there, but then eventually something clicks and you can type in the solution. The puzzles, especially the later ones, feature some esoteric vocabulary, and finding one of those unusual words is especially rewarding.

MPL has something in common with some of the best games I’ve played. When I play, I feel like I’m engaged in a conversation with game designer. For example in this game I would get a sense that some words are “right” and some are “wrong”. The designer, 4am, has chosen certain words to be in his puzzles. However, he also allows you to use any word that fits to clear the letters. This means you can either solve a puzzle by spamming words until you eventually hit every letter, or you can try to find the perfect minimum set of words that will do. Some of my favorite puzzles have been the ones where I’ll find a word, then re-examine the puzzle and think to myself, “no, that’s not a word that 4am would have put there intentionally.” I’ll restart the level and sure enough, there’s a better word to be found that solves the puzzle more efficiently.

There’s different strategies you have to learn as the levels progress. Early levels teach the importance of restarting, as there’s a lot of overlap in the smaller words and clearning an easy word early on can lead you down a path where you have just one or two letters left and no idea what word they belong to. It’s often easier to figure out which word led you astray, then restart the level without clearing that word. You can then see the “correct” word in the remaining letters.

Later on, it becomes important to recognize high-probability word segments. If you can find three of four letters that you’re pretty sure belong together, finding the rest of the word becomes easier.

Some puzzles are a “full matrix,” that is, every element of the letter grid is populated. Some puzzles reuse letters, which means some of the columns will have fewer letters. These puzzles require different tactics to solve. When you get to the big puzzles, it often helps to fill in pseudo-words, words that aren’t real words but sort of sound like they could be. Often, after you do that, you’ll spot an actual word that’s a few letters away. It feels kind of like using your subconscious to solve the puzzle.

I like how 4am doesn’t shy away from the rare, lesser-used letters. You’ll often get a puzzle with several Q’s, X’s, Y’s, and Z’s. And then you’ll think, “Oh, this will be easy”… and it’s not!

I have a few minor quibbles with the game, although there’s nothing that ruins the experience or would make me not recommend it. First of all, it would be nice if there were some sort of scoring mechanism. As it is right now, your only score is the number of puzzles you’ve completed. But like I explained, each puzzle has one “perfect” solution, where you use the minimum number of words to clear all the letters. As it stands, the only reward for clearing a puzzle is… you cleared the puzzle. And that’s fine, it works well, but I’d also like to see it score you based on how well you cleared it. You could get full points for a perfect clear and something less if you used more words. I like finding the perfect clears; it would be nice if the game rewarded me for doing so. And it would also give me incentive to go back and 100% the game if it kept track of my score for each level.

Along the same lines, it would be nice if the game listed the words I’ve found. There’s plenty of space on the screen to have a little list off to the side. When I got to the later levels, I started writing down my own list of the words as I found them, because I knew I might have to backtrack. Before I started doing that, I had a couple puzzles where I got them mostly-solved, but then I needed to restart and try a diffrent word, but I couldn’t remember the words I had used already!

It’s possible to find words by accident. Sometimes this is good, sometimes not. It’s a little disappointing to happen on a solution you weren’t looking for. This is especially true when typing letters. The game shouldn’t check for words when it’s scrolling through multiple letters (because you typed a letter, say, at the bottom of the column). It should only check after the column has finished scrolling.

In a tweet 4am mentioned he had spent an inordinate amount of time removing bad words from the game, but I was still able to find a couple obscenities. You have to be looking for them though (and the game doesn’t give you credit for finding them).

I mentioned the interstitials that the game rewards you with at every 10% complete. But they’re the same for every set of puzzles. It would have been nice to get some different quotes in there.

Lastly, there’s a little i/o bug with typing. The game doesn’t check keystrokes while it’s animating the letter columns, and that causes it to miss keystrokes. Especially if you want to type in a whole word at once, it’s easy to type too fast and have the game not register anything beyond the first letter. (Or is this an emulator bug? I don’t know enough to be able to tell.)

Overall, if you like casual word games, and you don’t mind playing on a classic Apple emulator, then Million Perfect Letters is well worth your time.